The majority of people are always impressed with an indoor pool. They aren’t very common and usually prompt the excited response, “You have an indoor pool?” Here are a few things indoor pools don’t have: electrical rooms, mechanical rooms, stairwells, and walls of double layer sheetrock.

Late on a Sunday afternoon, we received a call from one of our clients saying that a hot water pipe burst and filled 5,000 square feet of basement space with water. It was essentially a four-foot deep, indoor swimming pool, or hot tub, rather.

To add to the problem, the drain in the basement eventually backed up and started blowing water back into the basement. When we arrived the power was still up in the building, which created an extremely dangerous situation as the electrical room in the basement was partially submerged in four-feet of water.

Any time you enter a situation involving water and electricity your first objective is to cut power to the building. In this instance, the power shorted out only a few minutes after we arrived due to the large amount of water.

The good news is that the situation was much, much safer without the building having power. The bad news is that electricity is a necessity for quickly removing water from a building. To resolve the problem, we brought in our 125 kilowatt generator and three spider boxes to plug in our equipment in order to perform the water extraction.

For those less familiar with the world of restoration and portable power, a spider box is a temporary power distribution tool that hooks directly to a generator and contains several power outlets for additional equipment. When paired with a trailer mounted generator, you have a mobile power station that is ready to tackle any job.

Once the power supply was set up, we deployed three sump pumps that each contained 100 feet of hose running to the exterior of the building; the draining of the basement took approximately six hours to complete. Once the majority of the water was removed, we utilized our portable extractors to remove the remaining water.

The first question asked when it comes to work in restoration is, “Has the problem been resolved?” In this case, the answer was no because the drain was not yet unclogged. The problem continued for two more days and resulted in the generator being left in place and a single sump pump running continuously to drain the basement.

The city government was employed to run a pipe camera down into the drain and find the problem. Once the problem was resolved, our focus turned to the drying of the basement itself. The humidity level was off the charts as we placed two Ultimate 340 LGR Humidifiers and four axial air movers to expedite the drying process.

Our equipment had to run on generator power for three days before electricity could be restored to the building. Although we weren’t able to save all of the sheet rock in the basement, a timely response and the right equipment enabled us to restore the majority of it.

The lesson from this experience is that power, whether by line or by generator, is a very precious thing. In any water situation, having the necessary tools to attack the situation without missing a beat is critical for the well-being of the property and its tenants. 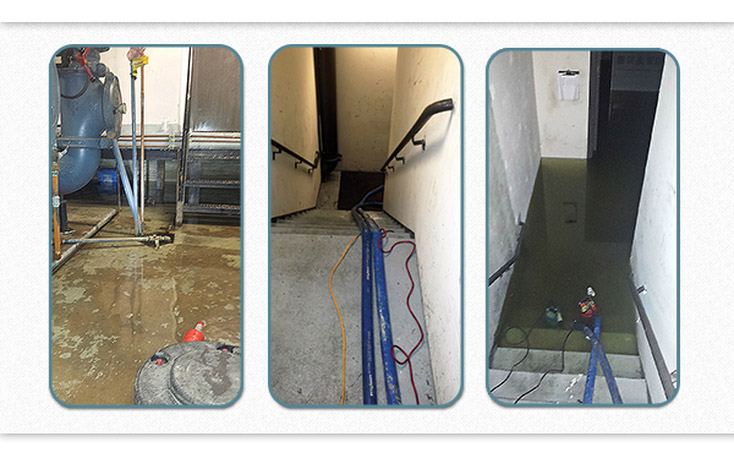