According the Center for Disease Control, legionella is a bacteria most commonly found to affect the respiratory system, which causes a disease called Legionnaire’s. It is a flu like infection with symptoms of cough, high fever, muscle aches, shortness of breath and headaches (which of course, are very similar to the flu). Legionnaire’s has proven to be fatal when it comes into contact with those individuals with compromised immune systems So, what does this have to do with you?

Well, recently Knight was called into perform a complete disinfection and remediation of legionella evidence within a large multi-tenant facility. The bacteria had found its’ way into the water system and traces were found in certain sinks and water fountains. Being HAZWOPER certified (a bio-hazard certification) and soundly educated/experienced in the field of terminal cleaning, Knight immediately responded and began the decontamination process.

1. We donned ourselves with the proper personal protective equipment (PPE) using the following:

2. We then began the containment and disinfecting process:

3. We then completed the process by removing all materials and bagging all PPE in biohazard disposal materials.

One of the most key items to look for in any biohazard cleaning company is certification. HAZWOPER certification “is a set of guidelines produced and maintained by the Occupational Safety and Health Administration which regulates hazardous waste operations and emergency services in the United States and its territories.” It’s a highly valued certification in the industry and also an extremely important piece when it comes to handling such materials. So, when you get into a tight spot, give us a call and let our team of HAZWOPER certified professionals take over. It will put your mind at ease and you’ll have the peace of mind knowing you are in the right hands. 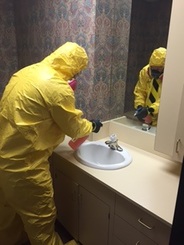