Have you ever heard the phrase “Lazy Sunday” or “Sunday Funday”? Well, this one fine Sunday in July was neither for an Austin, TX property manager.

Tenant: “Our cooling system leak sensors have failed. We have a 90,000 square foot flex space which is now over 50 percent covered in water.”

Emergency Coordinator: “A team will be dispatched to your facility immediately; don’t panic, we will take care of everything for you.”
Thirty-seven minutes later the first team of emergency responders arrives onsite. Within one hour, five technicians; within two hours, nine technicians onsite.

Upon arrival, all personnel immediately began extracting over 60,000 square feet of standing water by utilizing portable extractions units, truck mounted extractors, and a large riding scrubber to hit all of the open warehouse areas.

After the standing water was removed, we utilized moisture meters and thermal imaging cameras and discovered that water had wicked up the sheetrock approximately 24 inches. At this point, the real issue is that due to the large amounts of water inside the facility, the humidity levels were through the roof.
We placed 150 air movers to dry the effected materials, but how do you evaporate all of the moisture in the air in a facility of this size? How do you decrease the humidity?
Sure, you could install over 50 portable dehumidifiers to balance the environment, but there has to be a more efficient way, right?

The answer is yes and it comes in the form of trailer mounted desiccant dehumidifiers.
We chose to use three, 5000 CFM desiccant dehumidifiers powered by a 375 KW generator. This allowed us to dehumidify the entire warehouse, several offices, the clean room, and some of the office space without taking up a lot of space.

We also didn’t have to run a power cable to junction boxes throughout the facility from several generators. This takes away the necessity of emptying barrels of water, and most importantly, saves money and is more efficient. We ran 20-inch tubing along a wire which was attached 12-feet above the ground throughout the entire effected area, allowing us to evenly disperse the dehumidified air everywhere it was needed. Within 24 hours we saw over a 50 percent drop in relative humidity, which provided us with optimal drying conditions.

What is the main reason we use desiccants over dehumidifiers? Well, outside of efficiency, there is a significant cost difference for the client.

After all was said and done, we were able to have the entire facility dry with no demolition/replacement necessary within five days. The client was able to be up and running at 100 percent within seven days of the flood occurring. Everything was back to normal quickly, efficiently, and cost-effectively. 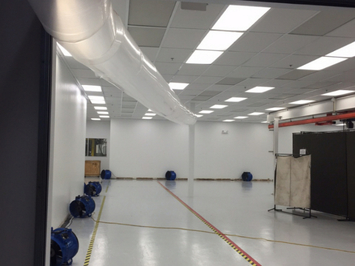 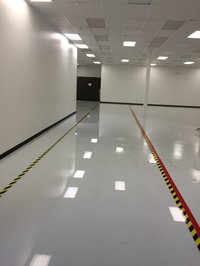